Clash of the Comedies : B [Poule C+D]

Clash of the Comedies : B [Poule C+D]

A motion picture destined to offend nearly two thirds of the civilized world. And severely annoy the other third.

"On a Midnight Clear 2000 years ago, three wise men enter a manger where a babe is wrapped in swaddling clothes. It is an infant called Brian...and the three wise men are in the wrong manger. For the rest of his life, Brian (Graham Chapman) finds himself regarded as something of a Messiah--yet he's always in the shadow of this Other Guy from Galilee. Brian is witness to the Sermon of the Mount, but his seat is in such a bad location that he can't hear any of it ("Blessed are the cheesemakers?"). Ultimately he is brought before Pontius Pilate and sentenced to crucifixion, which takes place at that crowded, non-exclusive execution site a few blocks shy of Calvary. Rather than utter the Last Six Words, Brian leads his fellow crucifixees in a spirited rendition of a British music hall cheer-up song "Always Look On The Bright Side of Life." The whole Monty Python gang (Chapman, John Cleese, Michael Palin, Eric Idle, and Terry Gilliam) are on hand in multiple roles, playing such sacred characters as Stan Called Loretta, Biggus Dickus, Deadly Dirk, Casts the First Stone, and Intensely Dull Youth; also showing up are Goon Show veteran Spike Milligan and a Liverpool musician named George Harrison."

"Ernst Lubitsch used Laszlo Aladar's play The Honest Finder as a springboard for one of his most delightful early-1930s Paramount confections. Herbert Marshall and Miriam Hopkins play Gaston and Lily, a pair of Parisian thieves, both disguised as nobility, who decide to rob lovely perfume company executive Mariette Colet (Kay Francis); Gaston gets a job as Mariette's confidential secretary, while Lily installs herself as the woman's typist. Love rears its head, forcing Gaston to choose between marriage to Mariette and a fast getaway with Lily. Filled with marvelous throwaway gags and sophisticated innuendo, Trouble in Paradise was described by one critic as "as close to perfection as anything I have ever seen in the movies.""
Omhoog

The Life of Brian

A Disgrace to Criminals Everywhere.

"Guy Ritchie's sophomore follow-up to his 1998 sleeper hit Lock, Stock, and Two Smoking Barrels, Snatch revisits the previous film's territory of London's crime-ridden underbelly, and does so with the same brand of humor and stylish direction that made Ritchie's first effort a surprise success. With a labyrinthine plot that is ostensibly oriented around a missing diamond, Snatch introduces viewers to three groups of characters intent on retrieving the elusive stone, which has been stolen from an Antwerp jeweler. In the first group are friends and business partners Turkish (Jason Statham, who also supplies the film's voice-over narration) and Tommy (Stephen Graham), who join up with Mickey (Brad Pitt), an Irish gypsy and boxer. Turkish and Tommy make arrangements with Mickey to take a fall in a match engineered by lunatic gang leader Brick Top (Alan Ford). In another corner resides equally loony Russian gangster Boris the Blade (Rade Sherbedgia), who has asked Jewish gangster Franky Four Fingers (Benicio Del Toro) to place a bet on the match for him. Boris is also scheming to have Sol (Lennie James), the owner of a pawn shop, rob the place with a couple of dim associates. Meanwhile, Avi (Dennis Farina), freshly arrived in London from New York, hires Bullet Tooth Tony (Vinnie Jones) to find Franky when he goes missing; it seems that it was none other than Franky who was supposed to be transporting the purloined diamond to New York." 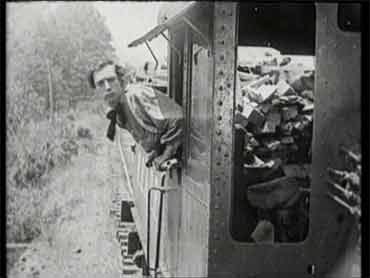 "Buster Keaton plays Johnny Gray, a Southern railroad engineer who loves his train engine, The General, almost as much as he loves Annabelle Lee (Marion Mack). When the opening shots of the Civil War are fired at Fort Sumter, Johnny tries to enlist -- and he is deemed too useful as an engineer to be a soldier. All Johnny knows is that he's been rejected, and Annabelle, thinking him a coward, turns her back on him. When Northern spies steal the General (and, unwittingly, Annabelle), the story switches from drama and romance to adventure mixed with Keaton's trademark deadpan humor as he uses every means possible to catch up to the General, thwart the Yankees, and rescue his darling Annabelle -- for starters. As always, Keaton performs his own stunts, combining his prodigious dexterity, impeccable comic timing, and expressive body language to convey more emotion than the stars of any of the talkies that were soon to dominate cinema."
Omhoog