Clash of the Comedies: Kwartfinale A

Clash of the Comedies: Kwartfinale A

1. A Fish Called Wanda - The Naked Gun: From the Files of the Police Squad
2. O Brother Where Art Thou - The Big Lebowski
Omhoog

A tale of murder, lust, greed, revenge, and seafood. 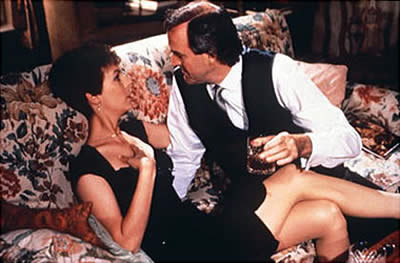 "In A Fish Called Wanda, Jamie Lee Curtis plays an ambitious con artist who uses every ounce of her sexual wiles to obtain a fortune in jewels stolen by her gangster lover Tom Georgeson. First, she romances Georgeson's dimwitted but deadly henchman Kevin Kline (who won an Academy Award for his performance). Then, to clear the path for her getaway with Kline, Jamie woos Georgeson's starched-shirt attorney, John Cleese -- and it's Cleese whom she genuinely falls in love with. Michael Palin, Cleese's former Monty Python cohort, plays a stuttering mob flunkey who continually messes up his one big assignment: killing a little old lady (it isn't that he has any qualms about knocking off the old dear; it's just that her pet dogs keep getting in the way). A Fish Called Wanda was scripted by star John Cleese."

The Naked Gun: From the Files of Police Squad

The Villain. Even Mother Teresa wanted him dead.

"We know we're in a 1988 film when we're invited to laugh at O.J. Simpson in an opening slapstick sequence. We can also pinpoint the year of production when hardnosed cop Frank Drebin (Leslie Nielsen), during a scuffle with the world's leading dictators, wipes the wine-colored birthmark off the head of Soviet president Mikhail Gorbachev. Those wacky ZAZ boys -- David Zucker, Jim Abrahams, and Jerry Zucker -- serve up a feature-length spinoff of their cult favorite TV show Police Squad!. Seeking vengeance when his partner (Simpson) is shot full of holes by drug dealers, dead-pan and dead-brained Lt. Frank Drebin searches for the Mister Big behind it all. Drebin suspects above-reproach shipping magnate Vincent Ludwig (Ricardo Montalban), but he can't prove a thing. Bumped from the force by the mayor (Nancy Marchand), Drebin, with the unexpected assistance of Ludwig's ex-girlfriend (Priscilla Presley), manages to nab the bad guy at an Angels-Mariners baseball game, where Reggie Jackson has been programmed to assassinate Queen Elizabeth. MGM mogul Irving Thalberg once reportedly told the Marx Brothers, "You can't build jokes on top of jokes." The producers of Naked Gun prove otherwise; indeed, one could develop writer's cramp just listing the gags in the film's first 20 minutes. Naked Gun: From the Files of Police Squad was followed by two lesser but still hilarious sequels, Naked Gun 2 1/2: The Smell of Fear (1991) and Naked Gun 33 1/3: The Final Insult (1994)."
Omhoog

The Naked Gun: From the Files of Police Squad, briljante komedie.
Omhoog

I Wendy- I Wanda- I wonder...
Omhoog
Gesloten
62 berichten