Clash of the Gangster Flicks: groep A

Clash of the Gangster Flicks: groep A 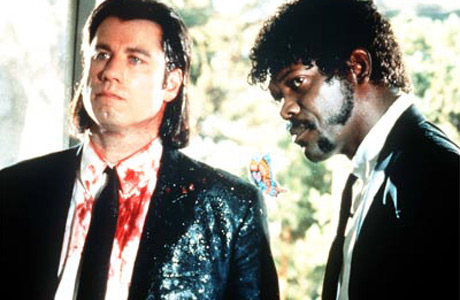 ”If my answers frighten you then you should cease asking scary questions.”

Allmovie.com
A critical sensation and a box-office hit, Quentin Tarantino's Pulp Fiction (1994) embedded its movie-made world of loquacious hit men and fateful coincidences into the popular consciousness, becoming one of the most influential films of the 1990s. Updating the hard-boiled crime film with postmodern aplomb, and twisting movie time as adroitly as Orson Welles and Stanley Kubrick, Tarantino weaves a morality play through a pop culture fun house drawn from sources as disparate as 1950s and 1970s kitsch, Jean-Luc Godard, Howard Hawks, boxing flicks, Hong Kong action movies, and Kiss Me Deadly (1955). The surreal yet realistic atmosphere, long takes, and wittily pop-literate non-stop dialogue emotionally engage the viewer in the minutiae of the characters' experience even as the film also comments on their status as pulp creations, rendering the moments of shockingly baroque violence simultaneously humorous and ghastly. Winner of numerous critics' prizes and the Palme d'Or at the Cannes Film Festival, Pulp Fiction was nominated for seven Oscars, including Best Picture, Best Director, Best Actor for John Travolta's career-resurrecting turn as Vincent, and Best Supporting Actor for Samuel L. Jackson's furiously philosophical Jules; Tarantino and Roger Avary won for Best Original Screenplay. None of its many imitators has yet come close to matching Pulp Fiction's impact. 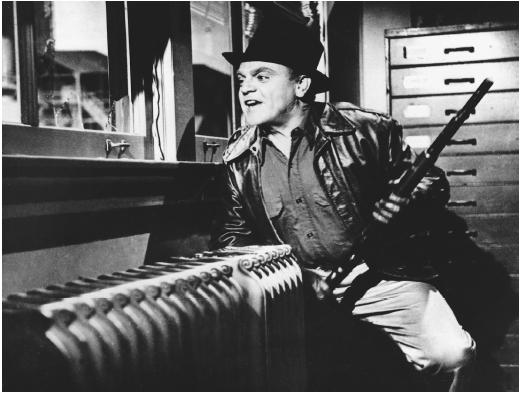 ”It's always "somebody tipped them." Never "the cops are smart."”

Allmovie.com
James Cagney made his name on screen as a criminal, and he gave his last truly great outlaw performance in White Heat, which may well be the most intelligent and striking work of his career. While Cagney always knew how to lend his characters a charismatic menace, his Cody Jarrett in White Heat is both menacing and uncomfortably bizarre. Given to strange semi-epileptic seizures, sudden bursts of horrible violence, and a bizarre attachment to his mother that stops just short of incest, Cody represents the criminal as head case, at once fascinating and disturbingly unstable. Cagney manages to lend Cody just enough of his traditional tough-talking, wise guy veneer that he seems like a conventional screen criminal at first, but it doesn't take long for Cody to reveal himself as a full-blown psychotic, and the perversely self-immolating "Made it, Ma! Top of the world!" finale is only the most spectacular symptom of his madness. Raoul Walsh's direction is hardly as audacious as Cagney's performance, but it is crisp, efficient, and briskly paced, and in a way Cagney's portrayal may well be all the more effective in this context. While White Heat's narrative often seems like the traditional story of a charismatic bad guy who will be forced to pay for his crimes in the last reel, it instead houses a different and most puzzling sort of villain, who paved the way for the stranger, more brutal outlaws who would dominate crime cinema in the 1960s and 1970s.
Omhoog